Last Monday Lorenzo jumped on Frances and she fell over and when she got up and ran away he chased her all around the track until the Lady spotted him. She said, I’ve lost my patience with you now and when Lorenzo said he’d go look for it if she paid him a fiver I thought she was going to lose her temper, too.

Anyway, she took Frances away and put her with Ernie and Sinbad de Barra because they’re too crippled to jump on anyone. The Lady had their feet trimmed by a barefoot trimmer lady last Saturday so I hope their feet get better soon. I thought the trimmer lady’s feet would get very cold and I said it to Bon Bon but she said I was a fool so I kicked her.

They say the Laminitis has made their backs sore and Sinbad de Barra is very cross, he says he’s been trying to tell the Lady his back’s been at him for weeks and is her head up her arse or what? I tried to tell him she’s been very busy all of January getting ready for the big fundraiser which I can’t tell you about yet but he was having none of it. So I had a word and she’s massaging their backs 3 times a week now. They’ve had one go each and they say they feel better already. Laminitis is a terrible thing and you shouldn’t let your ponies get it.

At the end of the week Lorenzo got stuck in the pink wheelbarrow, and had to wait for the Lady to unstick him. After that he opened the front door and went down to the kitchen and got stuck in the passage and said if the Lady didn’t unstick him he’d lie down and roll so she had to take him into the kitchen to turn him around because he can’t reverse.

Fuckoffginger got out of her rug in the night and wrapped the straps around her front legs so she couldn’t move. Her proper name is Amanda and she’s 38 years old, she must be going senile. Luckily the Lady managed to untangle her without cutting the straps off which would have caused an almighty uproar because it was Frances’s Curse of the Burning Arsehole rug that she only had on loan while hers was in the wash. Even so, Frances had alot to say about it but I can’t say those rude words here because they on the forbidden list.

Our fishermen saw off the Russians so they’ve gone to cause trouble in the Black Sea now. What the fuck is wrong with them, why don’t they just go home and drink vodka and eat pirozhki and stop annoying the rest of the world, they’re like Al Caponey running around shitting on other ponies’ shit. 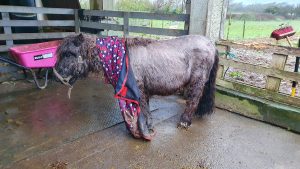 1 thought on “The Russians have gone”